From RonalDino and a young league

The Euregio Futsal League (EFL) was founded at the beginning of 2019 on the initiative of Michael van Heiss (Poca Juniors player and team manager) and currently has its cross-border indoor venues in Vaals, Bocholtz, Heerlen, Kerkrade (all NL) and Alsdorf (D).

The league was born out of the idea that in the long run it seemed less and less attractive to play only « friendly matches » between a few teams from the bordering countries and instead prefer to establish a league with a competitive character.

After a few meetings, many conversations, phone calls and emails between the respective managers and organisers of the various futsal teams from Aachen, Alsdorf, Vaals, Valkenburg, Heerlen and the surrounding area, the competition was initially launched at the beginning of 2019 under the name « Oude (H)erendivisie« , in reference to the 1st Dutch Football League (Eredivisie) and initially due to the average age of the founding teams.

However, it quickly became clear that this was not to remain a league for « old men ». And so the name was changed to « Euregio Futsal League » at the end of the first season.

The average age quickly dropped to around the early 30s, with the youngest player in the league being 20 and the oldest « RonalDino » in his early 60s, a veteran of Aachen amateur football. 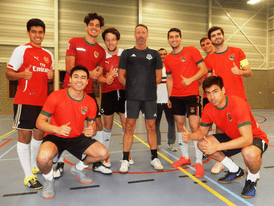 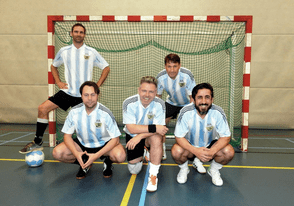 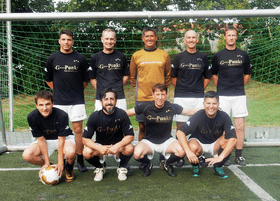 The diversity of the league is reflected in the 14 teams that have taken part in league operations since 2019. In addition to teams from Germany and the Netherlands, these are in particular South and Central American teams with players from Brazil, Bolivia, Mexico as well as teams from Spain and the former Yugoslavia, whose players are studying in Aachen or Limburg or have been living and working in the Euregio for some time.

The current champion is Dynamo Vaals, which is also made up almost exclusively of active and former amateur players who have played in the 3rd Dutch Futsal League for years.

In total, the squads of all teams include more than 200 players from over 20 different nations.

The current 10 league participants include:

In the meantime, the players of the teams know each other quite well from various encounters and thanks to the team stories and player portraits in facebook and also maintain partly friendly relations off the pitch, which of course have to rest during the 2 x 25 minutes of play. If desired, a referee can be requested for each match. 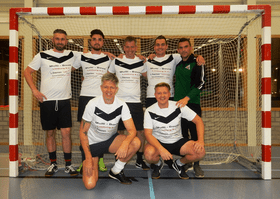 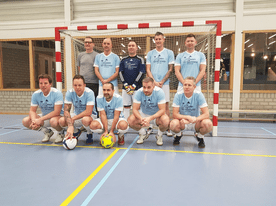 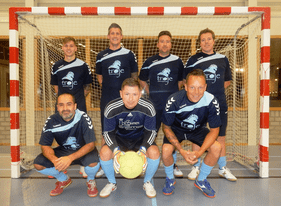 Although this is a recreational league, it does not have to hide behind the regular futsal leagues (e.g. Futsal Mittelrhein Liga) in terms of quality. Since the players of almost all teams are recruited from active and former amateur footballers from the Aachen and Zuid-Limburg area, friendly comparisons with teams from the regular league have sometimes ended in favour of the EFL teams.

A total of 14 teams have participated in the league to date. In 2020, 10 teams were active in the league, which is currently interrupted for the second time due to Covid-19, so that the 2020 season (championship and cup) can hopefully still be played out in 2021. However, this currently depends in particular on the infection situation in the Netherlands, as most of the games take place in the halls in the border towns of Heerlen, Vaals, and Bocholtz/Simpelveld.

The league is run according to fixed rules that deviate only minimally from the official futsal rules and to which all teams have committed themselves at the time of foundation. This includes that players are only allowed to play for one team, that the teams wear uniform kits, and that line-ups, goal scorers etc. have to be reported to the social media manager after each match so that he can keep results, standings, statistics, and stories about the teams up-to-date.

Thanks to the Futsal league for this massive input. Minor mistakes cannot be fully excluded.

Where to find the Euregio futsal league (today)

This item is filed under: