You live in a triangle of three countries, across five regions with different languages and cultures at a very short distance. No matter if you are native to the Euregio Meuse-Rhine or came from afar – everyone is somehow abroad at some point in their daily life.

Find newsletters, minicourses, and different modules on how to face the intercultural challenge between the German Rhineland, Southern Limburg, Belgian Limburg, Liège Province, and East-Belgium.

A bit of difference every day

This newsletter is actually a selection of eight most important aspects, for people that live or work in both Germany and the Netherlands. This is the unique option to learn about how the neighbours perceive each other – in English.

The Euregio Meuse-Rhine unites different areas. People in Aachen perceive hierarchy different from their neighbours in Maastricht, Hasselt or Liège. They also have different standards in communication and what is “normal”.

On the other hand, the neighbouring regions share a lot of common history, traditions, and even languages. They also share a somewhat common everyday life and labour market across borders.

Linguacluster is more about traditions and regional particularities across Belgium, Germany, and the Netherlands. It unites 30 topics across the cross-border triangle in three languages. For children and their parents.

Belgium, Germany, and the Netherlands also share a common history of “Guestworkers”, especially from Italy, Morocco, and Turkey. They have shaped and co-created their new home countries in some (similar) ways. 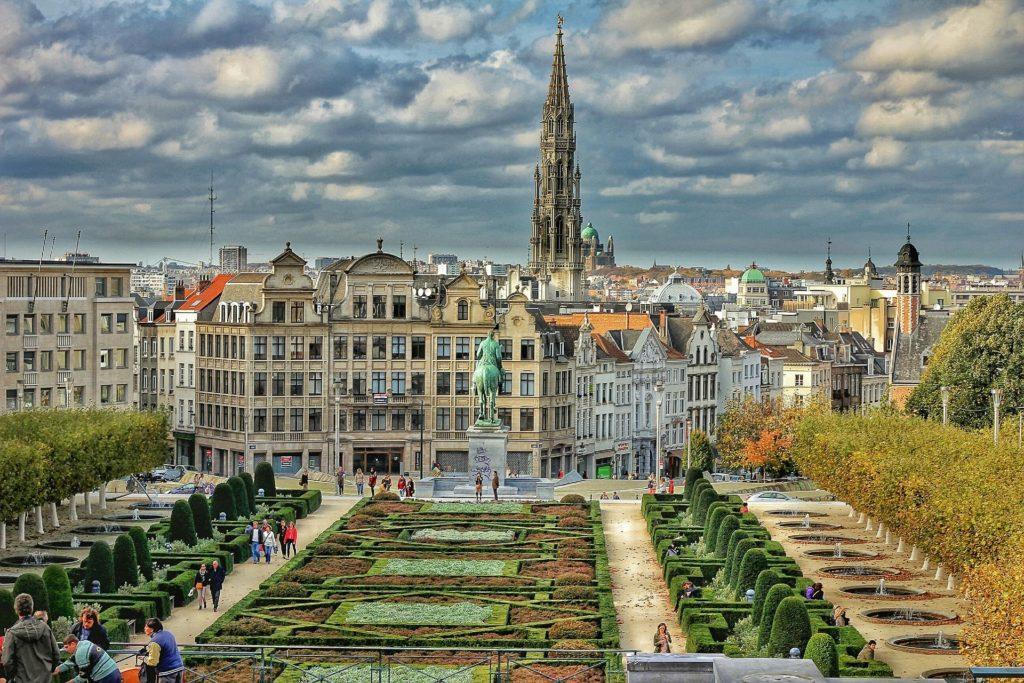 Belgium is an intercultural universe in itself. Three language communities and three (not quite the same) regions split the country`s everyday life. However, the parts of Belgium share more than a common foreign policy and the railroad network:

When it comes to Germany and the Netherlands, cultural differences are subject to a whole lot of publications and online-material.

Undutchables (commercial recruitment website, yet free material, all in English)

Quiz
How Dutch are you?

Culture and cultural differences is something vague and we need methaphors to grasp and easen its complexity. As a rule of the thumb, all methapors and models invite to take a closer look, to not stop with the headline or first impression. Be quick to watch but slow to judge!

Intercultural differences can become a challenge when you do not know how to deal with them. Some easy theories can help you to pinpoint the issue you actually face, go explore and finally enjoy.

Culture explained as an iceberg: 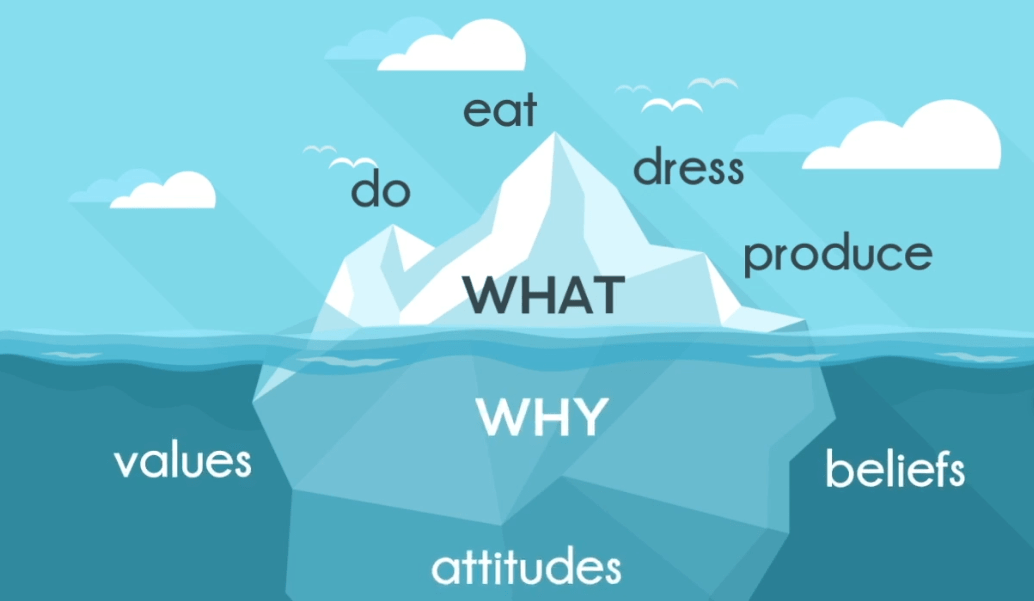 We see something and interpret. If someone does not say “thank you” or “you are welcome”, we interpret that the person’s attitude is somewhat unfriendly or even hostile. A more indepth-understanding of the Eisberg-Model will help you navigate intercultural everyday life and look beyond the surface.

Kommunikationsmodell Schulz-von-Thun is another approach to look behind messages. The trainer identifies four aspects to every message, see the in-depth video explanation video (DE only):

Information aspect: “There is an iceberg, and it is not too far”

Call to action: “Do anything to avoid crashing the iceberg”

Relational aspect: “Dear colleague, why didn’t you see something until now?”

Reveiling information about myself: “I am afraid that the Titanic might sink” 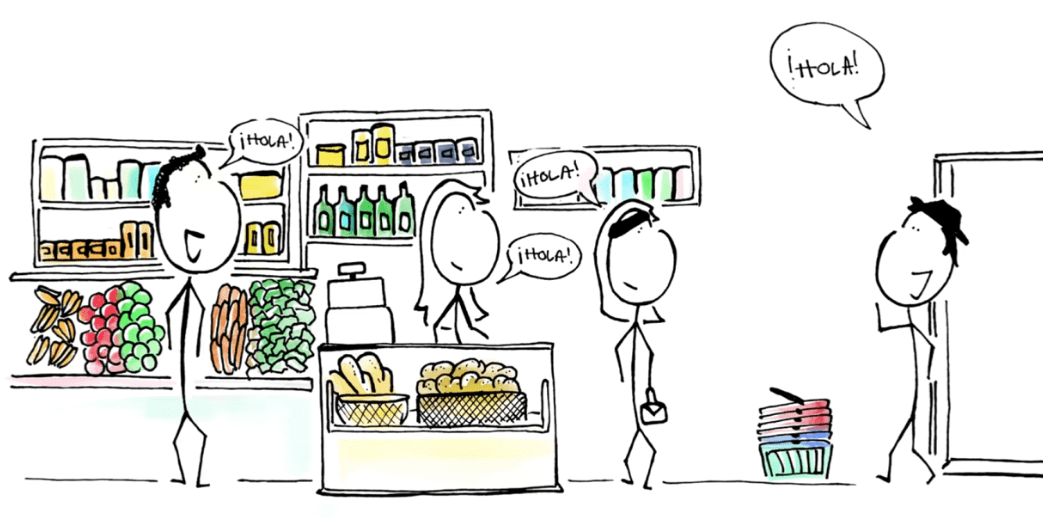 What is normal? We see the world through cultural glasses, and interpret behaviour in the way we grew up and perceive “normal”. In other cultures, glasses have another colour, just as in people in love see the whole world through rose-coloured glasses.

How to eat an elephant? Bit by bit.

This method is called “5 times why?”. A problem is named and refined.A vague: “I feel lonely” can be broken down to its pieces and addressed.

The Dutch sociologist Hofstede tried to map the three (and more) countries along with so-called “cultural dimensions“. This is to be understood as an approach to name the differences vaguely perceived. It is not to be taken for absolute truth! 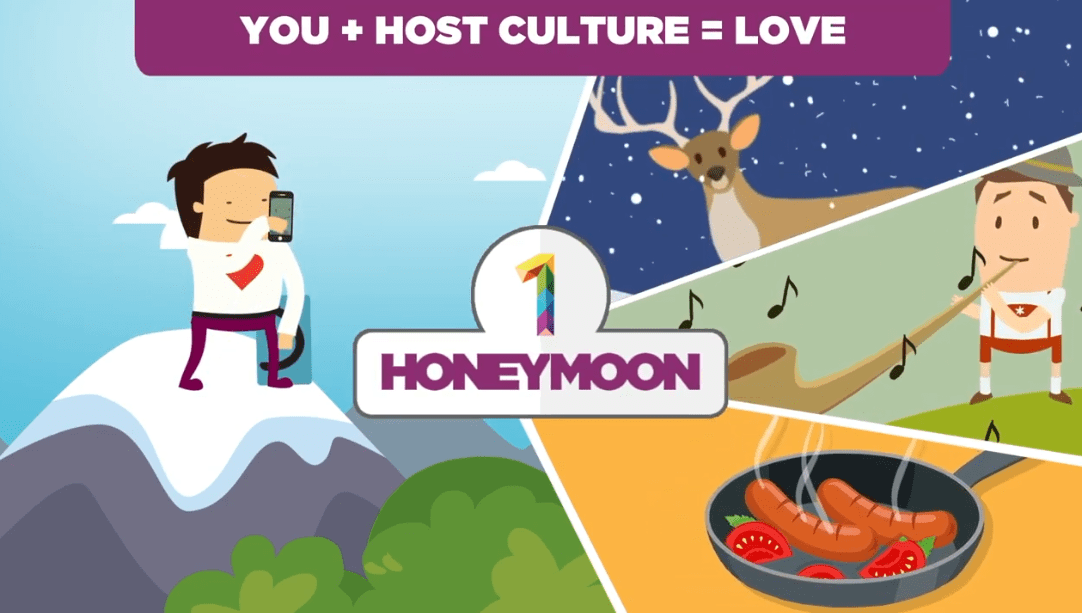 Most people love holidays and travelling. Everything is just great, a new country can be lovely and exotic in the beginning. After some time, you might be frustrated, you might become passive and want to depend on someone from your own country. This is normal and even necessary to adapt, you just need some time and effort to restructure the way you are. It will bring you closer to the new culture and you’ll learn to accept two normalities at once. Going back to your (home-)country can lead to a reverse culture shock.

Similar to the iceberg, culture can be explained like an onion. Some aspects are on the surface, but the core is on the inside. You have to work your way there to really understand. Similarly, each people’s behaviour is somewhat visible, but motivated by beliefs and values that ly in the core.

Many imagine their life abroad as a rising curve: Getting around, learning the language, getting to know people – it gets better bit by bit. Yes, there are frustrations, but they do not disturb the overall tendency. 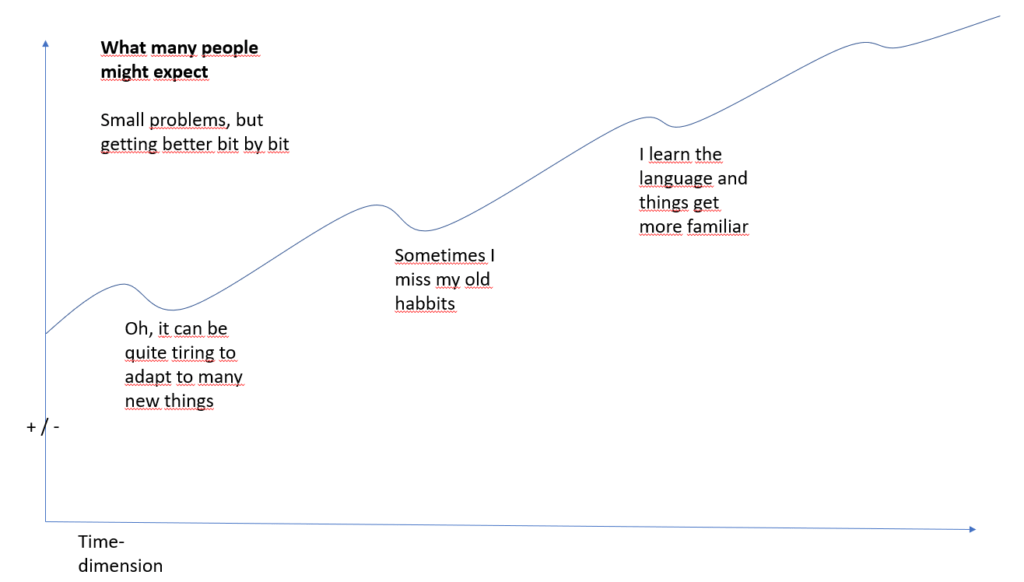 Theory – and experiences – divide several phases. it is normal to be in an excited “Honeymoon” in the beginning, and a deep culture shock is also normal. A culture shock is even necessary to adapt to a new everyday life and culture, like a rite of passage. 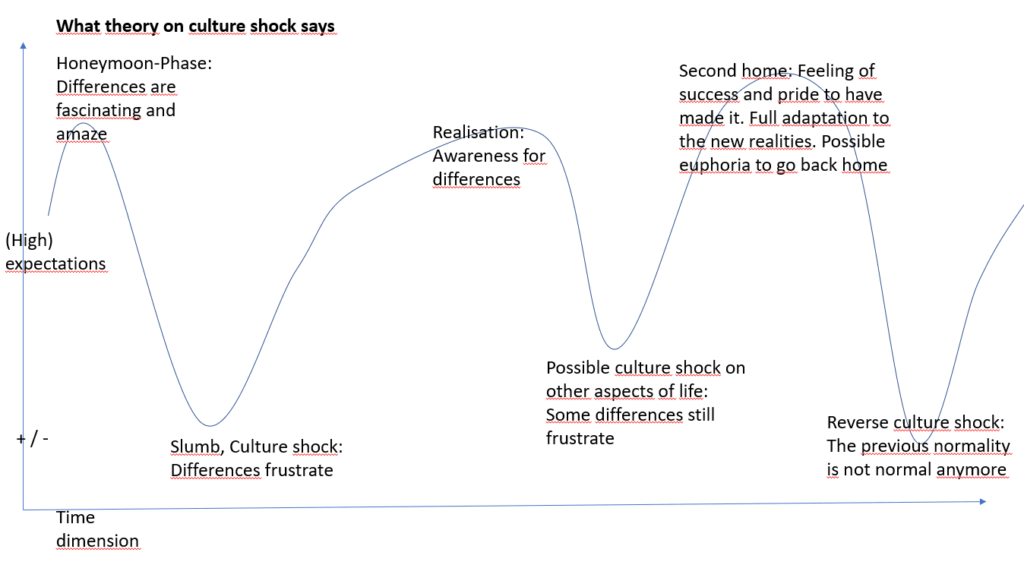 When you return to your home country every day after work, you experience a reverse culture shock every day – well, do you? Here is a model to give some hints on what to expect when living and working in two countries at once. 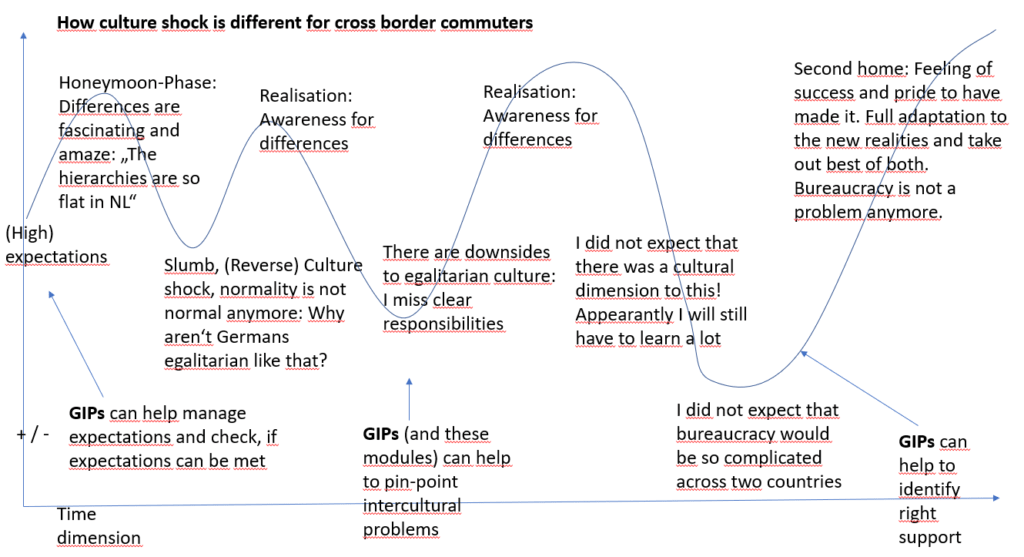 Example: Flat hierarchies in the Netherlands

Peter comes from Germany and started working in the Netherlands.

In the beginning (honeymoon), he is amazed by how flat hierarchies are compared to what he was used to. He can address his boss in an informal way, it does not even feel like he was his boss.

After some time, however, he is enerved. There is no clear structure and responsibility, meetings seem quite chaotic, and plans are changed several times.

Later, Peter understands the context of this working culture and sees the pro’s and con’s more clearly. He sees a pattern behind what appeared “chaotic” and learns about the law of “voortschrijdende inzicht” and actually likes this attitude of just doing, failing, doing again, failing better.

If Peter came come back to work in a (stereo-)typical German company, he might experience a reverse culture shock when communication is formal and hierarchy more strict. 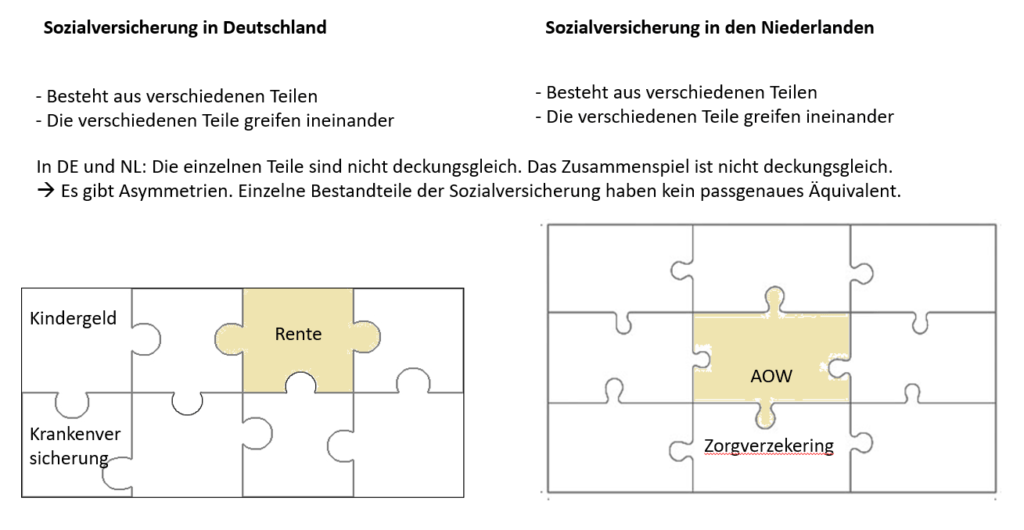 Culture is like a puzzle built of various puzzle-pieces. Many puzzle pieces re-occur in every culture, but they often have a different shape or have another context. Across borders, in culture and bureaucracies, there is always an asymmetry.

For example pension: The German “Rente” is an important puzzle-piece of the German social security; such as the Dutch “AOW” is in the Dutch social security system. But both are not fully equivalent, and transferring one to the other leads to some frictions and questions. The Grenzinfopunkte are a free service to facilitate the transfer from one system to another so it fits best for you.

Videotutorials to get things done in the Netherlands

Each country has a different bureaucracy. When you start living or working abroad, this is one of the first sides of the iceberg that you will be confronted with. You might not understand why something is necessary that you did not even do in your previous (home-)country, cf. the iceberg model. And you might not fully comprehend what you are actually doing, as one bureaucratic piece in the new context is not fully equivalent to a similar one in the old context.

Find our listing with some helpful advice on solving the practical aspects of intercultural life.

Join Marie from Liège on her way to get her BSN done:

Find all official information on the BSN this video from https://jiphaaglanden.nl/

Join Bianca in her move to the Netherlands and getting her BSN-number (DE only) https://www.youtube.com/watch?v=7hK93P6SvhY

Explanatory video step by step and with general remarks (Dutch only, 2016)

Bureaucracy between the Netherlands and Belgium (and not only): Bureau Belgische Zaken

Bureaucracy between Germany and the Netherlands (and not only): Bureau Duitse Zaken

Wallonia from a Flemish perspective

Netherlands from a German perspective (DE only)

Belgium from a German perspective (DE only)

Rich collection of material for trainings by Council of Europe

Intercultural learning needs a lot of patience. Do not get frustrated or if you get, remember that the culture shock is part of a learning curve that helps you integrate and understand much more intensively.

This item is filed under:

There are more than two dozens (!) of cross-border trains and buses…