There are more than two dozens (!) of cross-border trains and buses within the Euregio Meuse-Rhine. In the cities Aachen, Maastricht, Liège, and Eupen, you find busses, trains, and ticketing machines from two or even three countries. This website is a unique overview on all connections, so best filter for the cities you are interested in:

Find below the ticketing options that allow for subscriptions in two or three countries at once. One option for common exploration is the common Euregioticket. With up to two people and three children (on weekends), you can criss-cross your new region the whole day long for 19€. With this overview, find handy advice on how to (cheaply) travel the Euregio without a car.

It costs just €19 to travel across all local and regional transport in all three countries all day long. For the same €19, on weekends and public holidays you can even travel with the whole family (two adults and three children under 12).

The Euregioticket is the easiest way for exploring the euroregion, the ticket is available at ticketing machines, bus drivers and online-/app-based ticketing.

Cost: €19 per person and day on weekdays

Cost: €19 for two persons per day on weekends and three kids from up to 12 years

In all three countries, you find automats and internet ticketing. In the Netherlands, with a Euregioticket you can ask for special passing through gates that regularly open with OV-chip cards only. Exceptions are for the high-speed connections Thalys in between Aachen and Liège.

Cost: €19 for two people per day on weekends, additionally the ticket is also valid for up to three children under 12 years old.

Note: you can go on “holiday” as long as one single of the three countries has a national or religious day-off.

For an additional 4€, you can also take your bike. During the week traveling with a bike is often restricted to off-peak hours but on weekends and in the Dutch summer holidays in July and August there are no restrictions. Please be aware, that the number of bikes on the train is often limited and most buses do not allow bikes at all.
You can buy the additional ticket in Germany and the Netherlands. You can also buy a bike ticket for a single journey within Belgium, and travel to Germany or the Netherlands.

Bicycles
For an additional €4, you can take your bicycle with you in public transport (where it is allowed) – all day, across the entire Euregio Meuse-Rhine. Belgium, where the country-wide bike ticket for €4 is also valid in the Dutch and German parts of the Euregio Meuse-Rhine. For climate-friendly, multi-modal transport, find the best city infrastructure in both, BE and especially NL Limburg, and the Ravel networks and Vennbahn in Germany and Belgium, allowing for a smooth crossing of hills and valleys on former railroad paths.
Reach & usability

The ticket covers the major connections in the Euregion Meuse-Rhine area, including most trains and all busses in the three countries.

Exceptions are the high-speed trains (Thalys, ICE) and some trains in the Province of Liège. To find all details at one glance, head to the brief info and download or find the  map “Karte des Geltungsbereichs” on AVV provider’s information.

This selection is by no means complete, but gives a first orientation on crossing the border by train and bus. 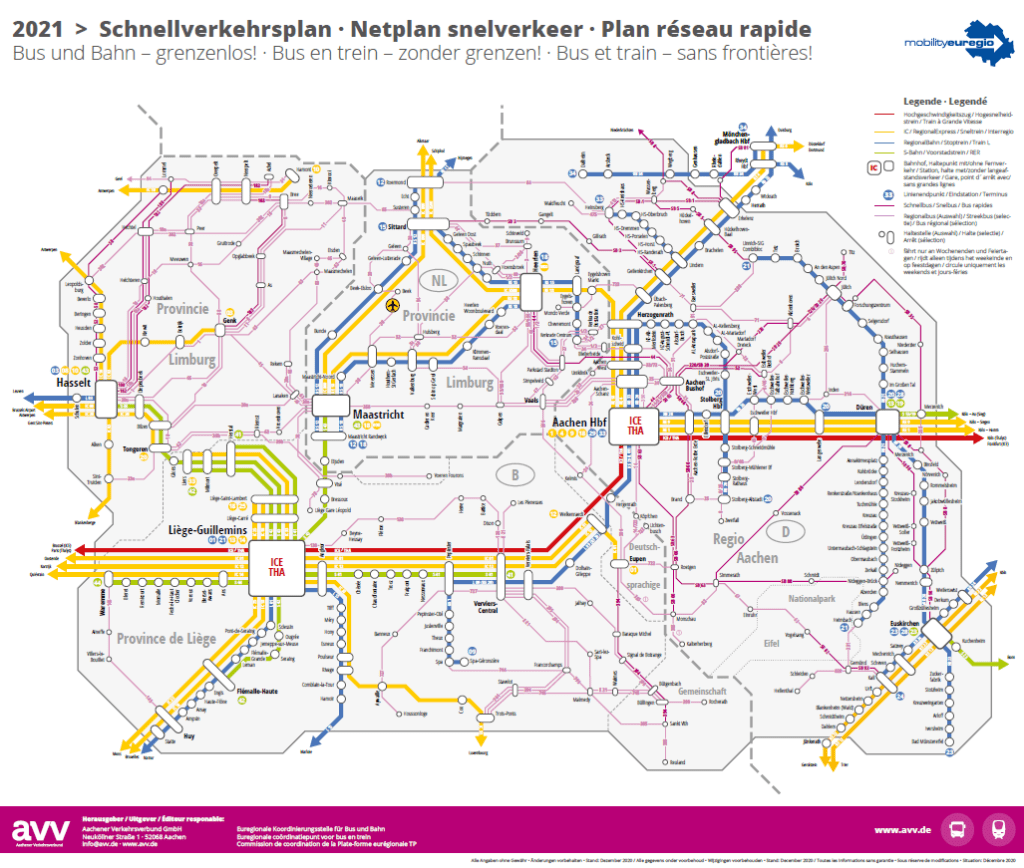 This page is a brief summary of multiple sources and resources freely available. Find some of the most helpful extra ones below, and in the keywords throughout all this page.

This site allows for a highly detailed overview on all cross-border connections from and to Belgium. Fully Dutch, several extensive summaries and additional maps provide comprehensive info. Some info on this page got inspired by the connections enlisted.

Subscriptions offer a much cheaper option compared to single tickets. A short bus ride within Aachen costs €2.80 – the same price will take you from Aachen to Vaals (NL) or to Kelmis (BE). Prices and conditions for monthly season tickets vary between €30 – €150. In the Netherlands and Belgium, the actual distance is important, in Germany the fare varies from the amount of zones you cross. For regular routes crossing the Euregio, you will find fares from one of the providers. Depending on your situation, a combination of fares from two or even more providers can make for a cheaper option.

Student fares across the border

If you are student from Aachen, with the Semesterticket you can go with all trains (except ICE) in North Rhine-Westphalia – and up to Heerlen and Maastricht.

If you are headed on a longer journey: Note that except for the regional airports of Aachen/Maastricht and Liège have only limited passenger connections. Within the reach of one to two hours, the closest airports are Cologne, Düsseldorf, Dortmund or Frankfurt (GER), Eindhoven, Schiphol (NL), Brussels and Charleroi (BE) and possibly Luxemburg (LUX, a country where public transport is for free). For getting to the German airports except for Frankfurt, a ticket for five people for a whole day might turn out cheaper than buying two one-way tickets. The low-cost airports Charleroi, Eindhoven and Dortmund can be reached by private bus companies at a higher fare only.

Coaches depart from the larger cities, for long distances or potentially just to the next city. Flixbus is market leader in Western Europe and started to provide occasional train connections, too (“flixtrain”).

The international Thalys high-speed-train stops in Aachen and Liège, and is a direct connection to go to Paris.

Being a cross-border commuter is living Europe with open borders 26,000 people…